The production of the brewing set per batch is up to approximately 1 650 liters of beer wort (= 1 500 liters of beer). The mash kettle is equipped with a steam bottom and a steam duplex for a steam heating. To the brewing set V15IN, we recommend the electric steam generator BM460dual or gas steam generator with output at least 150kg of steam per hour. 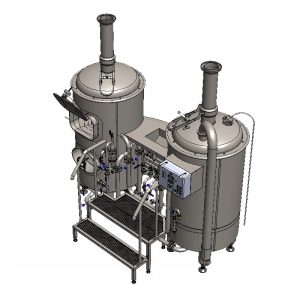